In 2019 Gold Wedding Gowns are Chic

Cloth of gold, sometimes called gold lame, is a special weave of fabric that incorporates metallic gold threads. Once considered the prerogative of royalty and the powerfully rich, it is now widely available for use by anyone who can afford it. 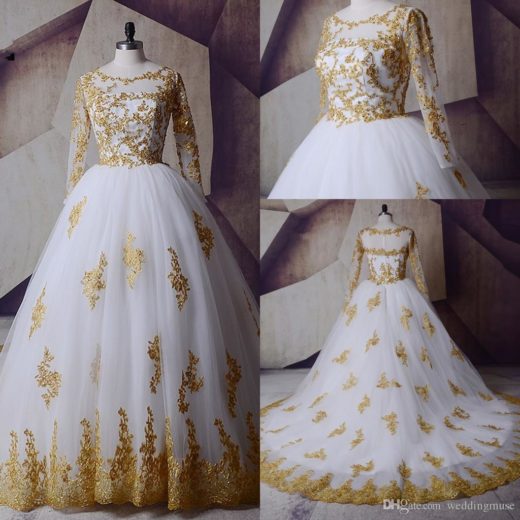 The best gold cloth comes from France, where weavers in southern towns like Marseilles learned the craft of threading gold into cotton and linen from the Arabs during the medieval Crusades.

This year the fashion world has been agog with the spectacle of gold wedding gowns at a number of socially prominent weddings. The bride has walked down the aisle in shimmering gold cloth that literally took guest’s breath away.

If you can afford it, a gold wedding gown is truly an eternal keepsake, because gold does not rust nor lose its brilliance over the years. It can be passed down from one generation to the next and appear just as brilliant sixty years later as when it was first used.

Slightly less expensive, but still impressive, is the gold sequin wedding gown. Hand sewn in places like India and Egypt, a gold sequin wedding dress will turn heads no matter where the wedding takes place — from a magnificent cathedral to an outdoor venue. To maintain a gold sequin gown it’s best to keep it in cold storage, like an animal fur. That way the threads holding the sequins on will never shrink and snap.