A few days ago we showed you some impressive stuff about the world’s ten most expensive villas . Today we come with fresh information on the number one mansion in terms of luxury and price.

Antilia is the name of this amazing 27-floor building in Mumbai. As of July 2010 its owner, Mukesh Ambani, is the world’s fourth richest man, so we shouldn’t be surprised to learn that his new home is worth between $1 billion and $2 billion. The internet presents many versions of the story: some say that Mukesh is the fifth richest person on earth, some say that the building is only worth $50-70 million. But the thing is we don’t really care about the actual figures. The important information is that this man owns the most expensive house on this planet, and the house itself is like nothing else on earth!

The construction is 560 ft tall and it was inspired by the Hanging Gardens of Babylon. This explains the three floors of hanging gardens. The skyscraper also has a health spa, a ballroom, several swimming pools, a 50 seats cinema, a parking space for 160 cars, three helicopter pads on the roof and many more.

Mukesh Ambani and his family – wife and three children – are expected to move in by the end of this month. Of course, a huge housewarming party will be held and probably the entire parking space will be filled, most likely with the rarest vehicles in the world. 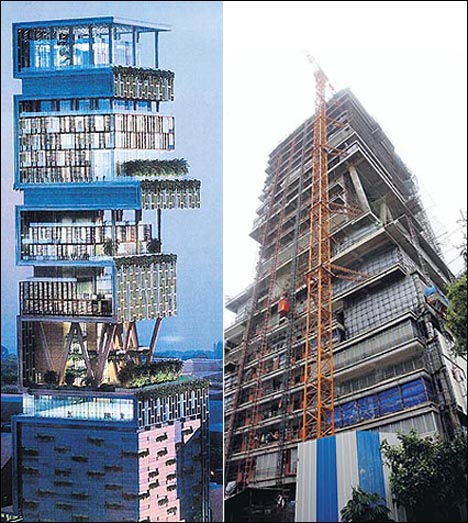