It seems that cinemas are running more and more out of fashion. People prefer investing their money in a home theater and skip paying for a ticket to watch a movie in a crowded public place.

But some of them will not stop until their entertainment room is like no other in the world. Here are some examples of what money can do.

A passionate Star Trek  series fan needed four years of planning and then six months of work to obtain this unique replica of the inside of the Enterprise.

The best part is that not only can you experience the thrill of watching movies with the best sound effects and image quality, but you can also enjoy a drink at the private bar next tot the home cinema room. 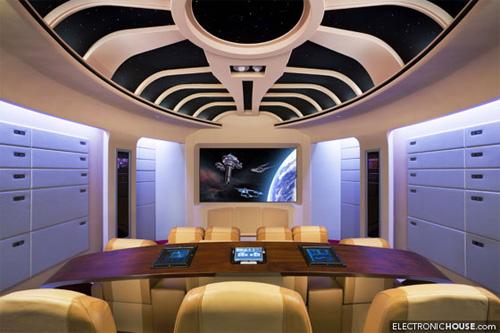 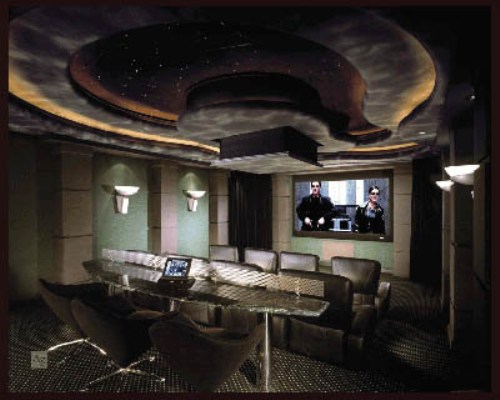 Another movie-inspired home theater is The Matrix. Everybody must have heard (or even experienced) the craze that conquered America after the launch of this movie. People started wearing black clothes and waiting for someone initiated to offer them a blue or a red pill and get them out of the system. Most probably that never happened for any of the Matrix enthusiasts, but there is one thing that can make you feel like being part of the movie: Bill Anderson’s $1 million Matrix home cinema. Yes, the whole deal cost almost a million dollars and yes, the owner’s name is Mr. Andrews… 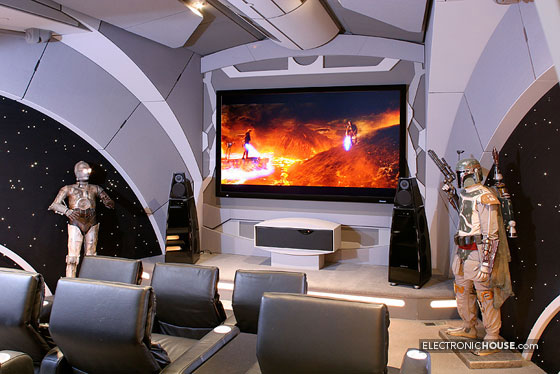 If you want your theme home theater to look like it was taken from your favorite movie, then probably the best thing to do is to call the lead designer of that movie and ask him to take care of your room. But who can afford that? Well, Vic Wertz and Lisa Stevens, the owners of this amazing entertainment area. Not only that they have the theater but they are also the owners of a 3,000 square feet of Stars Wars Museum.

4. The Greatest Show on Earth 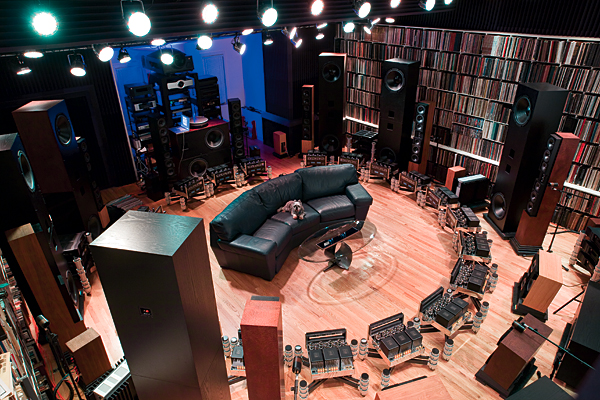 Surely you remember this from one of our previous entries on incredibly expensive surround systems Kipnis’ Outer Limits Theatre. This is not something you could easily forget. We are talking about a $6 million investment here! Crystal clear sound and perfect picture, packed in one huge room with only three seats. Now this is what we call exclusive! Jeremy Kipnis’ Outer Limit Home Theater is really something else. 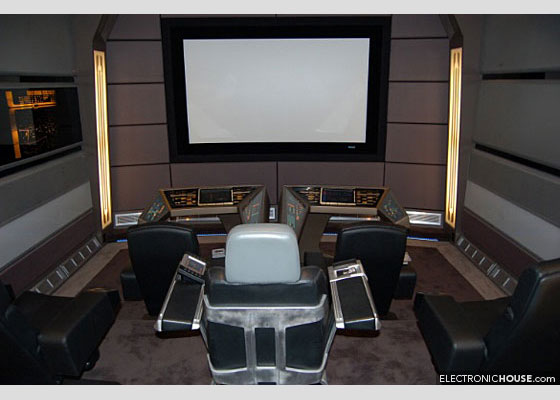 Star Trek has left many trekkies behind and two of them are lucky enough to be able to call themselves the owners of this perfect replica of the USS Enterprise control deck. Gary Sekulow and his wife received assistance from the senior illustrator of “The Next Generation” series, Rick Sternbach. This explains the realistic appearance of their Star Trek entertainment area. 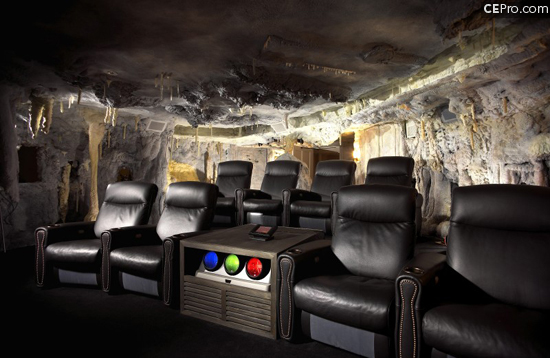 Now things get a little chilly. This is a picture of a cellar. Redesigned cellar, that is. The owner of this almost creepy home theater is – unsurprisingly – a retired naturalist. But by retired you should not understand dull, grumpy and loud-sounds hater. This theater says it all with its state of the art equipment. The owner received help from Nick Mark, the DC Audio Systems President and the outcome is spectacular.

7. Revenge of the Sith 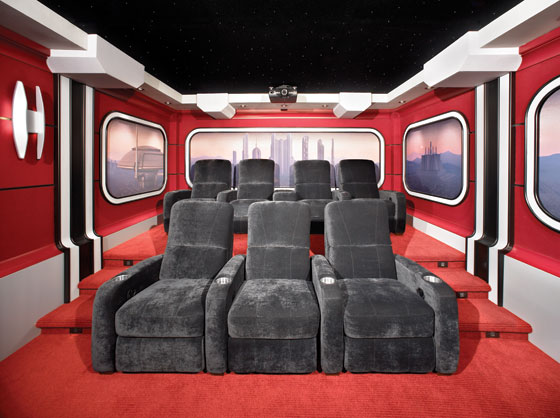 DreamSpace together with CDGI designed a one of a kind home theatre for owner Steve Simon. It took them a year and a half to complete the project and the result was beyond satisfying. Not only that they recreated the setting with dedicated attention to detail, but they even added a 3D rendering of the Imperial City background to make it all seem even more real. Good job! 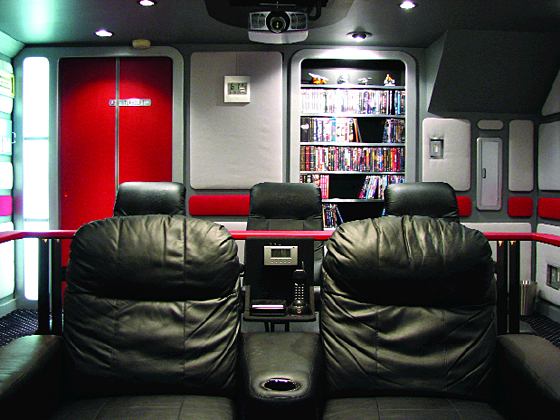 Once again we’ve been shown that money is not everything. This great-looking home theatre was built by one man and only $15,000. With his own two hands he erected a Star Trek monument for himself and his friends. Gary Reighn knew how to use relatively cheap materials and put them together to form a really good looking entertainment room that is impressive enough to make it here in our article. 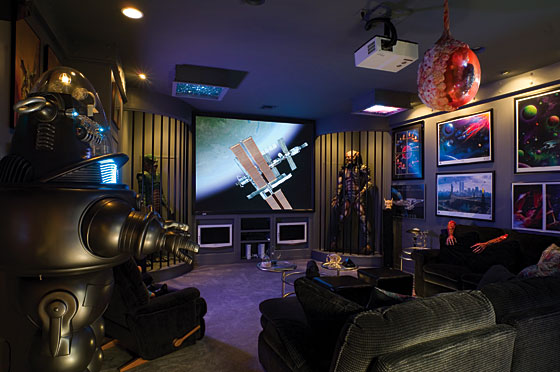 It all started with a passion for collecting memorabilia from different horror movies and space “tales”. Then Dr. David Winn realized he could do something really unique with his impressive alien crowd and decided to build his own 25×35 feet home entertainment set-up.

We believe he had a lot of fun decorating this room, judging by the position of the full-sized movie killers that come out of the ceiling or couch and are trying to grab their kill. The Alien, the Creature of the Black Lagoon and many other characters seem to have gathered there for a huge massacre. And did we mention the special effects that complete the setting? If you’re looking for the perfect place to retire, look no further! Victoria Gerrard, La Crosse travel expert, says these five locations are some of the most popular spots for retirees. They offer a variety of activities and amenities that will make your retirement unforgettable. So, what are you waiting for? Start planning your retirement […] Damon Becnel knows a thing or two about real estate. After all, he’s been in the construction and real estate industry for over 30 years. In that time, he’s learned what makes a good investment, where to build, and where the best places to live are. Being a land developer guarantees he’s had the experience […]