The world record price for sports memorabilia items has been recently broken at the SCP Auctions of California. The lot that fetched a whopping $4.4 million was Babe Ruth’s New York Yankees jersey from around 1920. The anonymous buyer paid exactly $4,415,658 for it, which is considerably more than the price of the famous baseball player’s house in Boston (Home Plate Farm in Sudbury, Mass.): $1.65.

This blue and grey woolen jersey is really more than just a clothing item, it’s a piece of history and a symbol of Babe Ruth’s supremacy in the history of baseball. Its inside collar bears the name “Ruth G.H.” written by hand in fading pink, and the “NEW YORK” letters are stitched in blue on the front of the jersey. The Great Bambino wore this jersey shortly after he joined the Yankees in 1920.

David Kohler, the president of SCP Auctions commented on the sale, saying “We are honored to, once again, be a part of history. This proves again that Babe Ruth is king in the sports memorabilia world.” The jersey spent five years on display in Babe Ruth Birthplace Museum in Baltimore, before being sold to Lelands.com.

Other record-breakers at the sale included a Yankee cap owned by pitcher David Wells and worn by Ruth, that fetched an impressive $537,278, and the Super Bowl XXV ring that belonged to Lawrence Taylor, the former New York Giants Hall of Fame linebacker, and which went for $230,401. 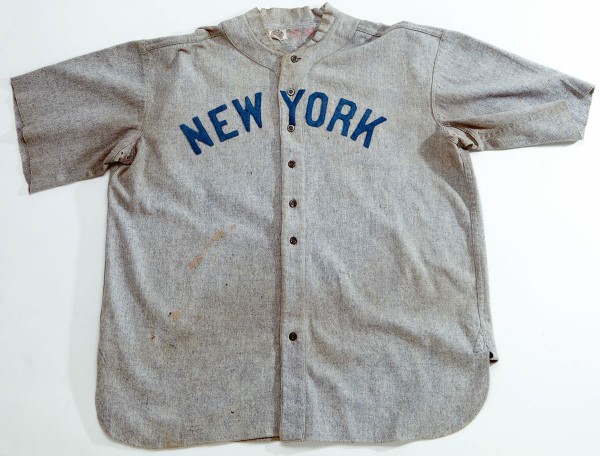