Summer and bikinis go hand in hand, especially since girls just love to spend their time at the beach or by the swimming pool during this hot and wonderful season. Shopping for bikinis can be a wallet-emptying experience, especially if the desired product is made by a reputable brand or features something really unique and innovative. However, there are a few bikinis out there that are quite unusual and not necessarily practical, yet they boast borderline ridiculous price tags. If you’re curious to learn a bit about these unconventional beachwear alternatives, all you have to do is keep on reading.

The Get Naked Bikini was designed in Germany and represents a devilish way of getting back at your ex because it was made to break and partially dissolve in water. Naturally, this means that the Get Naked Bikini can only be worn once before it gets completely ruined, which is why it might be considered a pretty expensive investment. However, the wearer’s reaction would be priceless. 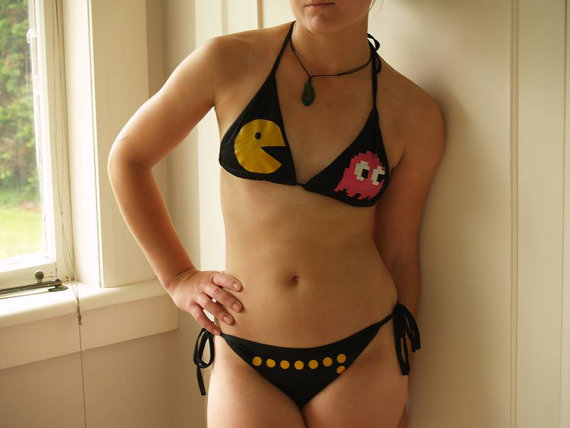 Pac-Man fans would definitely appreciate the unique design of this particular bikini, especially since it features a representation of the unique video game character as well as the ghosts that it always works so hard to gobble up. Even though we imagine that Pac-Man fans are mostly male, the Pac-Man bikini might represent the perfect choice for a gamer girl who doesn’t mind dishing about $30 on a beachwear alternative.

It’s always annoying when your phone runs out of juice and you’re at the beach, right? Well you can say goodbye to this inconvenience thanks to the Solar-Powered Bikini, which was created by a Brooklyn-based designer named Andrew Schneider. Andrew invested numerous hours of his time putting together a series of photo-voltaic film pieces in the shape of a bikini, which wouldn’t be usable in water but would ensure that you’d never see a low-power light on your favorite gadgets during your sunbathing sessions.

Remember when you parents used to tell you to eat your all of your vegetables? Well PETA was basically saying the same thing only on a larger scale and with the help of a lettuce bikini. We can’t really imagine how this thing would hold up when exposed to sunlight for a few hours, which means that wearing one at the beach is probably not an option. Not that you’d really be able to get your hands on a lettuce bikini anyway, since PETA commissioned it exclusively as part of an advertizing campaign that promoted meat-free hot dogs. 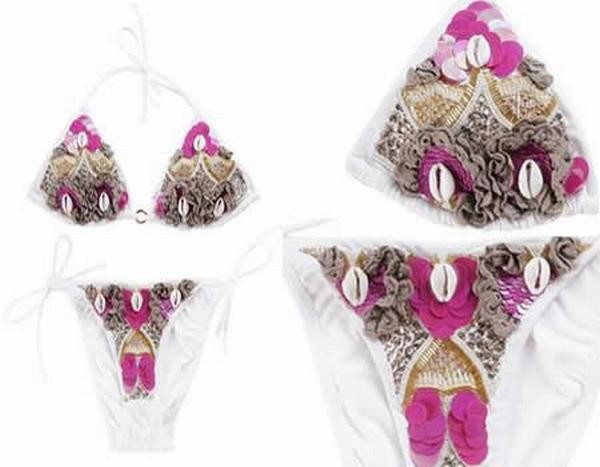 With a price tag of $625, this bikini would definitely turn heads at any beach, and that’s because it features an eye-catching design inspired by the renowned Le Lido Cabaret in Paris. This bikini was created by a talented designer named Alessandra Vicedomini, and its price tag is justified by the dazzling array of Swarovski Crystals that were sewn masterfully across its fabric.

Even though a bikini adorned with LEDs might seem like a good idea at first, the truth is that the end result is a bit kitschy. LED bikinis might work very well for promotional campaigns or similar endeavors, but wearing one at the beach might end up drawing attention in a bad way. 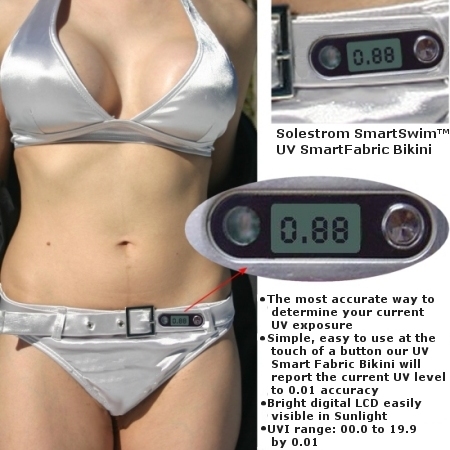 The SmartSwim Bikini by Solestorm can actually save you from potential sunburns, which might justify its steep price tag of $170. The bikini provides real-time data regarding the wearer’s UV exposure, and its long-lasting battery would probably be good for about 2 years. However, wouldn’t it just be easier to use high quality sunscreen and limit the time of your sunbathing sessions? The jury is still out on this one.

The Bacon Bikini is pretty much what you think it is. Now as delicious as bacon might be, we can’t really think of any good reason to transform it into underwear, but if we’re talking about a special event or some kind of joke, it might be acceptable even if only just. Bacon bikinis were worn about 4 years ago by a group of women who took part in a special contest. The contest caused quite a bit of controversy at the time, which was probably to be expected.

We couldn’t end our list without including the most expensive bikini in the world: the Steinmetz Diamonds bikini, which costs no less than $30 million. Designed by Susan Rosen, this bikini features 150 carats of diamonds, and it is definitely quite revealing. Whoever was lucky enough to wear this bejeweled bikini probably didn’t go for a swim in it though, but can we really blame her?