This pink diamond ring seems to be especially made for a Barbie -like woman. Delicate but certainly not invisible, this piece of jewelry sold for approximately $1 million a diamond karat. Now you’re probably wondering how many karats we’re taking about. No less than 6.89, which resulted in a whooping price of $6,914,500.

The ring is made of 18 karat rose gold and it bears one large cut-cornered modified rectangular fancy vivid purple pink diamond and several  other pavé-set pink diamonds. The buyer remained anonymous, so we don’t know what the story of the ring will be like from here on.

After this successful auction, which took place on December 7 in New York, Christie’s is happy to announce that their sales total for this year has reached $131 million – a new record on the jewelry auction market in the States. 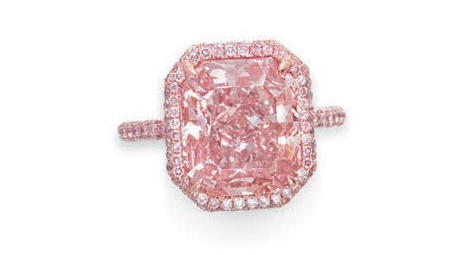