This is what Donald Sutherland told Mark Wahlberg, once their characters in Italian Job walked off with $35 million in gold bullions during a jewelry burglary, acted out on Venice’s channels. Then, accompanied by the rather beautiful Charlize Theron, they launch out into a new robbery of these very same bullions. In the supporting roles we see three Mini Coopers S, which the movie characters use to sneak through the tunnels of the subway, in the sewerage tubes and through the city traffic jam.

Italian Job is one of the coolest robbery action movies, along with Mission Impossible and Ocean 11. But only the Job offers breath-taking car chases. Which makes us want one of those Minis even more. Small, powerful, fast and maneuvering. The perfect street hooligans.

However, anyone who has driven a Mini knows that the interior of this roofed cart is too plastic for an exceptional car, such as the Mini Cooper. Here, Vilner Studio steps quite successfully in the Italian Job project. Vilner has to prove that the Mini’s plastic crate may turn into a really luxurious salon. And to discretely stress on the small Cooper’s design in order to turn it into an actor, ready for the supporting role in the next remake of Italian Job.

In order to design luxury in the interior, Vilner chose brown Nappa leather, the same used in Bentley’s factory in the English county of Cheshire. Yes, this car’s interior smells like the same expensive leather used for upholstering the salons of the modern Bentleys. This leather and the skills of Vilner’s craftsmen give this Mini’s interior color and texture. They are achieved with an attractive combination between the brown Nappa leather and two colors of high-tech Alcantara.

The main figured patterns in the salon are the rhombs. They are exactly the same as the ones which greet each owner of Bentley. We see them on the seats, as well as in the doors. The rhomb pattern continues also under the form of an arch, cutting through the Alcantara covered ceiling. The doors have gained elements of smooth black leather and the original plastic is sprayed in sparkling grey. Remember this color; later on you will meet it again!

Although built mainly of solid plastic, the panel is one of the most specific elements in today’s Minis. The funky sensation is rendered by a puzzle of different shapes that flow into one another. Each piece of this puzzle enjoys individual attention under the form of new facing. Only for the puzzle, the specialists in Vilner Studio have used a total of 4 types of materials – a two-color combination of classic Nappa and Alcantara leather, inlaid with white seams.  Even the rear-view mirror enjoys attention – it also stands out by its new facing of brown combination of leather and Alcantara.

On the outside, our Italian Job attracts attention like every movie star with fine prospects. The effect is achieved with a combination of grey polish, covered with matting foil with pearl effect and black mat. This play with the covers and colors is supplemented with a couple of racing lines, crossing through the middle of the coupe. All elements shining in chromium in the standard Mini (the tank cap, rings around the headlights and stop lamps, door handles, 18-inch wheel-rims) are matted in black to underline the hooligan appearance of this puppy.

This whole composition of craftsmanship, skills and specific style is supplemented by an unostentatious but definitely noticeable number on the doors. 01. In order to suggest to the slow wits who, after all, is No. 1. 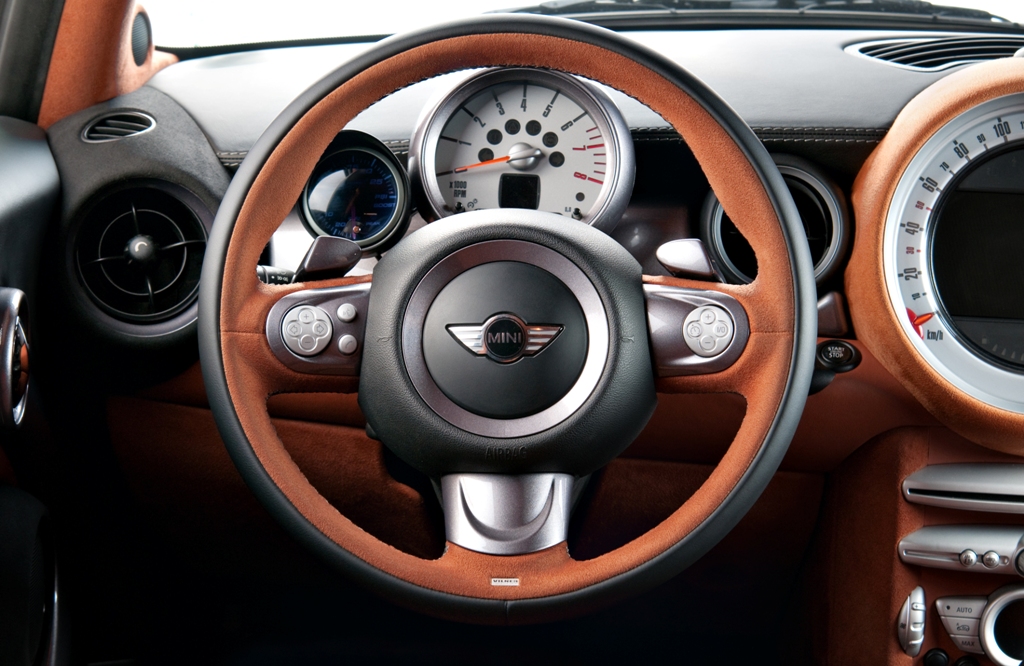