Faberge Couture Egg Jewels Back on the Luxury Market

“After its century in the shadows, the house of Faberge has returned to the international market.” This is the proud declaration of Brian Gilbertson, chairman of Pallinghurst Resources. The Faberge brand was bought by Pallinghurst from Unilever in 2007 and now the re-launched company is ready to once again fascinate the world with exquisite egg-shaped jewels.

The latest collections are called “Les Fameux de Faberge” and “Les Frissons de Faberge”, each consisting of twelve couture egg pendants. While the first collection flaunts only high-priced pieces (of up to $600,000), the second collection features a little more affordable jewels. This bold brand revival program includes the introduction of new and modern designs, innovative craftsmanship and only high-quality gem stones.

A perfect example of a modern Faberge egg is the “Diamond Egg”, made of titanium and covered with 66.4 carats of white diamonds. The diamonds actually weigh more than the titanium structure. Each egg is a one-off piece, meant to represent an old Russian proverb.

In the company’s efforts to revive the glory of Peter Carl Faberge’s name (the original maker of these fine pieces of jewelry), Faberge contacted the direct descendants of the famed Russian jeweler, and now his great granddaughter Sarah Faberge is the director of the brand’s special projects.

The glorious Les Fameux de Faberge collection is currently on display at Faberge in Geneva, until August 21. Gilbertson announced Pallinghurst’s intention to turn Faberge into “a world leading, fabulous brand”, and we can’t wait to see that happen. 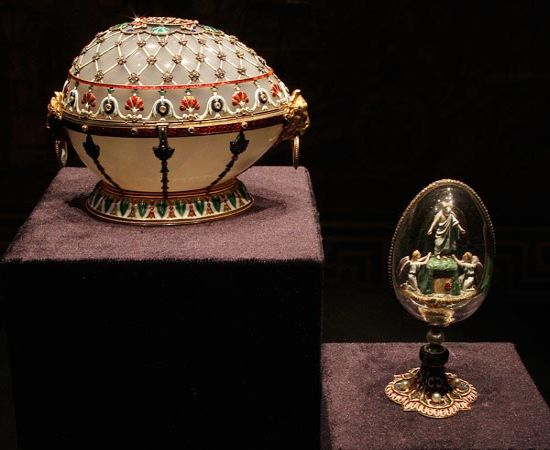