A portrait of Melinda and Bill Gates, painted by Jon Friedman, has been recently added to the “Recent Acquisition” exhibition at the National Portrait Gallery in Washington D.C. The portrait was commissioned by the museum as part of its permanent collection and is meant to evoke the couple’s sustained efforts to help people in need through the Bill & Melinda Gates Foundation. On the screen behind the couple, a very special message is written: “All Lives Have Equal Value”.

There is no direct reference to Microsoft, the company that Gates co-founded in 1975 and which eventually turned him into the richest man in the world. Bill and Melinda have declared themselves honored to have their portrait next to so many “outstanding Americans” in the gallery. They also thanked the artist “for creating the portrait in so thoughtful a manner, and for calling out the work of our foundation”.

The museum tells the story of America through famous men and women who have molded its culture. Here you can find portraits of presidents, poets, actors, activists, visionaries and even villains. In the “businessmen” category, Gates joins other distinguished names like Malcolm Forbes Jr., Ted Turner, Hugh Hefner and Rupert Murdoch. 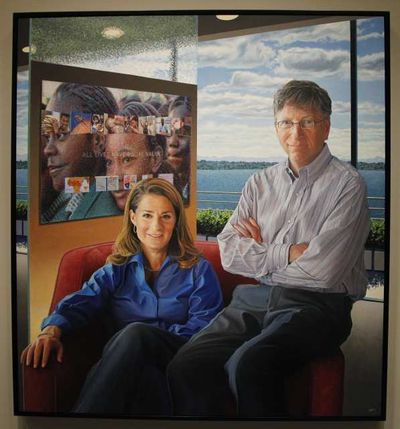