The tragic Titanic event is one of the most popular subjects in the world, especially after James Cameron made it so famous with his award winning movie in 1997.

This explains why some people are willing to throw thousands of dollars on unique items and documents related to the largest passenger steamship of the early 1900s. At one auction for instance, an affidavit written by a Titanic first class passenger, Laura Mabel Francatelli, sold for £23,000 (some $36,600). The document contains her words describing the “awful rumbling” and the tragic events that followed it.

Another interesting piece fetched £13,800 (almost $22,000)at the same auction. It was a postcard written onboard the immense ship by a third class passenger. She and her entire family (nine members) all died in the crash.

But the most impressive piece at the auction was the 30×40 inch promotional poster of the Titanic. There are several things about this poster that makes it so special. First of all, this is the only one that shows both the world famous RMS Titanic and its sister, the RMS Olympic. Second of all, the over 100 years old poster is in mint condition. Third, the poster was inspired by a painting by Montague Black and it was commissioned by the White Star Line, a British shipping company. It was initially expected to sell for £20,000 to £30,000, but it actually fetched £69,000 (about $57,300). 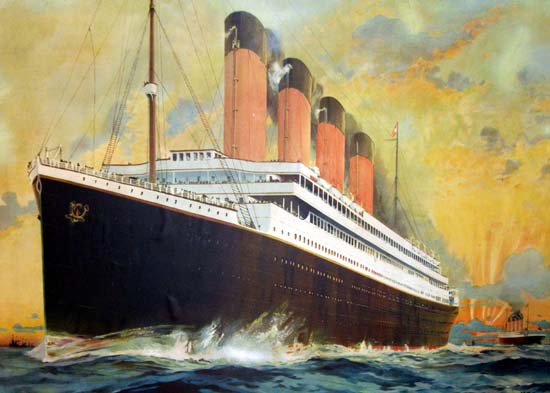